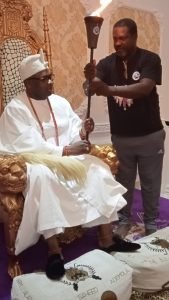 Lekki 10km Road Race Gets Royal Flag Off  On January 2

Top-class royal fathers, the Oniru of Iru land Oba Gbolahan Lawal and the Elegushi of Ikate land Oba Saheed Ademola will both flag off the Lekki 10km Road race slated for the 29th of this month.

The Monarchs gave this assurance  to the organisers during the presentation of the Community Marathon Series torch at their various Palace in Lagos ahead of the race scheduled for Freedom Way Lekki at 7am.

During the presentation, Oba Gbolahan Lawal stated that such initiative will only help to create healthy living, while the Elegushi of Ikate Land, Oba Saheed Ademola, lauded the initiative, which he said would help empower the youths and eliminate hooliganism from the society.

Speaking further the Elegushi, enjoined residents of Eti-Osa Local Government, to take advantage of the peaceful and serene environment to prepare adequately for the one day event.

In a related development, Organisers of the Community Marathon Series, have revealed that there would be a record number participants at the Lekki 10km Road race compared with the Festac Road race.

According to Project director of the event,  Moses Nwanze, the success recorded during the maiden edition of the Marathon Series has rubbed on positively on the registration of athletes for the race.

Presently, there are over five hundred runners, who have registered to feature in the competitive race, while hundred others would also compete in the non-competitive race.

Non competitors also stand a chance of winning Gym Equipments, such as Treadmill, Fat Wheel bicycle,  Crazy Massager and Stationary bicycle in the Lekki 10km raffle draw which would hold after the completion of the race.

The Community Marathon Series officially flagged off on the 2nd of October with the Festac 10km road race, where Ismael Sadjo of Cross River state emerged winner in the male category, while Joy Abiye David won the female event.