International Olympic Committee (IOC) President Thomas Bach has paid tribute to Japan’s former Prime Minister Shinzō Abe, who has died after being shot while giving a speech in Nara.

The 67-year-old Abe was shot twice, with the second shot hitting him in the back, causing him to fall to the ground, reports said. 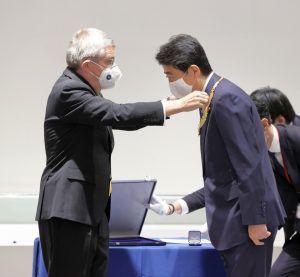 Abe was the former Liberal Democratic Party leader and Japan’s longest-serving Prime Minister, holding office from 2006 to 2007 and again from 2012 to 2020, before resigning due to health reasons.

Since stepping down, he has remained in the public eye and regularly appeared in the media to discuss current affairs.

“Japan has lost a great statesman, and the IOC has lost a valiant supporter and a dear friend of the Olympic Movement,” said Bach.

“On behalf of the International Olympic Committee, I would like to extend my most sincere condolences to his family, his friends and the Japanese people.”

Abe inherited Tokyo’s bid for the 2020 Olympic and Paralympic Games when he begun his second spell in charge of Japan.

Abe was in the front row in 2013 in Buenos Aires, after flying from a G20 Summit in Saint Petersburg in Russia, when then IOC President Jacques Rogge opened an envelope to announce Tokyo as the 2020 host, beating out Istanbul in the final vote.

It was Abe who assured IOC members at the time that the meltdown of three nuclear reactors in 2011 from an earthquake and tsunami was “under control.”

In fact, it was not entirely and Japan is still dealing with the disaster in the northern Fukushima prefecture.

But at the time, it helped reassure the Olympic Movement that there was nothing to worry about if they awarded Japan the Games for the first time since 1964.

Abe oversaw the preparations for the Olympics, including the controversial rebuilding of the National Stadium when the original plans had to be scrapped following public criticism of them.

He also had to deal with allegations that Tokyo 2020 had made illegal payments to help secure the right to host the Games.

The allegations led to Japanese Olympic Committee Tsunekazu Takeda, who had led the successful bid, having to step down.

His most public support of the Games was at the Closing Ceremony of Rio 2016 when he paraded before a sell-out crowd at the Maracana Stadium dressed as Nintendo game character Super Mario.

Abe’s humorous invitation to the next Olympics in Tokyo was a big hit among Brazilian fans, and to a worldwide television audience.

But, along with the IOC, Abe had to make the difficult decision in March 2020 to postpone the Olympic and Paralympic Games by a year as the coronavirus pandemic began to sweep across the world.

In August 2020, however, Abe announced he was stepping down as Prime Minister due to ulcerative colitis.

IOC President Thomas Bach said it was with “great sadness that I learned about the resignation of Prime Minister Abe” and that “all the Japanese athletes and the athletes of the entire world are very grateful to him”.

Bach later awarded Abe the Olympic Order and he was expected to be a prominent figure at the Opening Ceremony of the re-arranged Olympics in July 2021.

Abe decided not to attend the showpiece after the Japanese Government introduced state of emergency measures, which prevented fans from attending Tokyo 2020 events in the host city.

Bach revealed that Abe’s support to agree to a postponement of Tokyo 2020 helped ensure the Games were not cancelled altogether.

“Abe Shinzō (sic) was a man with a vision, full of determination and boundless energy to make his vision come true,” he said.

“What I appreciated most about him was that he was a man of his word.

“Only his vision, determination and dependability allowed us to take the unprecedented decision to postpone the Olympic Games Tokyo 2020.

“Without Prime Minister Abe Shinzō, these Olympic Games would never have happened, and the Olympic dream of athletes from all around the world would not have come true.

“He also wanted to be with us at the Olympic Games Paris 2024, to show his commitment to the Olympic Movement and the trustful partnership and friendship which developed over time.”

“I am deeply shocked by the barbaric killing of Shinzō Abe,” Coe, a member of the IOC Coordination Commission for Tokyo 2020, said.

“We became colleagues and friends through the process of Tokyo hosting the 2020 Olympic Games.

“I want to send my most sincere condolences to his family and the nation of Japan.”

Scrabblers Scramble For Over Two Million In The EEAST

Chicken And Chips – The Order Of Day In Birmingham