As Bendel Insurance prepare to host Ikorodu City FC in the Nigeria National League Week 20 fixture at the Samuel Ogbemudia Stadium on Wednesday, chairman of Edo State Sports Commission, Yussuf Alli, has called on sports loving Edo people, including ardent fans and supporters to come fill the Stadium to cheer their darling club to victory.

The Sports Commission boss made the call ahead of the club’s crucial fixture against Ikorodu Utd FC.

A win for the Edo Arsenal will guarantee their promotion with two matches to spare.

The ex International who is still basking in the euphoria of Insurance victory against their strongest foe,  Gateway Utd,  4-0 last week craves for full capacity Stadium during the midweek tie.

The Benin Arsenals need just three points to seal her promotion ticket to the NPFL and a win against Ikorodu City FC on Wednesday would guarantee that.

“We are expecting a full house on Wednesday. The fans have shown tremendous support and understanding this season and this match against Ikorodu will be fitting end to a glorious outing.

“So we are calling on football loving Edo people to fill the Stadium on Wednesday,  the players need an electric atmosphere to crown their promotion in style,” the record holding long jumper added. 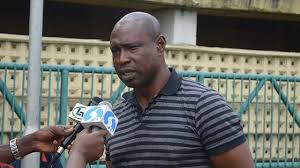 The Chairman further disclosed that fans and supporters will as usual, go home with free matchday jerseys for keeping faith with the club.

“We are all going forward together and we need you to remain faithful as we enter the promised land.

“Outside football, we are also doing everything to resurrect the spirit of champions and make Edo State the Number 1 destination in sports.”

Insurance have had impressive run this season, posting four away wins,four away draws, two away losses, and have maintained hundred percent home victories including last Wednesday’s 4-0 thrashing of Gateway Utd.

The Chairman picks up the story again. “The victory over Gateway was sweet and delivered in a clinical manner. Those who watched that match can attest to the fact that the club is back on style. That is the type of setting we are expecting to see against Ikorodu.

“It’s going to be party time on Wednesday… we need everybody at the Stadium to usher Insurance back to where they truly belong.”

Insurance are currently leading Group B1 with 43 points, seven points clear of closest rivals, Gateway Utd who will also be in another away game versus Vandrezzer FC.

The Benin Arsenal gained promotion to NPFL in 2018/2019   after 11 years but could not sustain their stay and were relegated immediately.