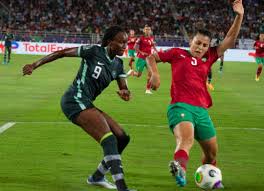 Tayo Ogunseye
Super Falcons coach Randy Waldrum said he was proud of his team’s performance despite   their semi-final defeat to host Morocco at the Women’s Africa Cup of Nations.
The nine-time champions had a daunting task in getting past the Moroccans who won the tie 5-4 on penalties after score stood at 1-1 after 120 minutes.
Backed by over 43,000 home fans at the Prince Moulay Hassan Stadium, the Atlas Lionesses dominated play in the first 10 minutes of the game before the Super Falcons took over and  controlled proceedings  till half time.
At the restart, things changed negatively for the Nigerian Ladies  when midfielder  Halimatu Ayinde was given the marching order for a foul on her opponent.
Despite playing a woman down, Kanu Uchenna caused a panic in their opponents’ goal area which resulted in an own-goal by Mrabet in 62 minute to put Nigeria ahead.
The lead however,  didn’t last long as  Morocco drew level four minutes later.
The game then got dramatic for Randy Waldrum’s side when Rasheedat Ajibade was sent off for a late  challenge  which further reduced the Falcons to nine players.
Unfortunately, the Moroccan couldn’t maximise their numerical advantage as they struggled to put the ball past goal keeper Chiamaka Nnadozie.
Substitute Monday Gift nearly punished their host when her lone effort at goal rattled the Moroccans’ post to keep the cheering crowd silent for a while before the referee ended the match for the penalty kick session. 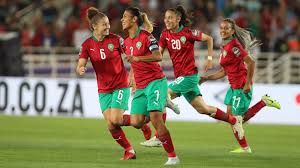 Ifeoma Onumonu”s failure to convert her kick with the  Moroccans scoring theirs, halted the Super Falcons flight to the final.
Morocco will play South Africa in Saturday’s final.
In the post-match conference,  Coach Waldrum praised his team for putting up astrong resilience in the match.

“We wanted to win the game, not just the World Cup ticket. Our substitutions were spot on and we can’t ask for more from the players, they gave their best.”
“We were in control of the game until after the first red card, then the second red card, I will put it this way.”
“We (Coaches) can’t comment on officiating, we will get into trouble.” He said.