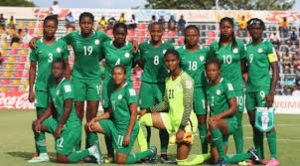 The national U-20 Women’s team,  Falconets are set to jet out from Abuja to Colombia this Thursday aboard Turkish Airlines ahead of the  FIFA World Cup scheduled to hold in Costa Rica next month.

The team handled by Christopher Danjuma is expected to conclude preparations for the tournament which holds from August 10 to 28 with a few friendly matches in Baranquilla, Colombia.

The delegation will leave the South American country for San Jose, Costa Rica.

The two-time finalist will begin their campaign In group C, against France on Thursday August 11 at the San Jose Estadio Nacional, before they face Korea on Sunday August 14 at the Alajuela Morera Soto Stadium.

Their last group game will be against Canada on August 22.

Nigeria were eliminated by Spain 2-1 in the in the quarter-final of the 8th edition in 2018.